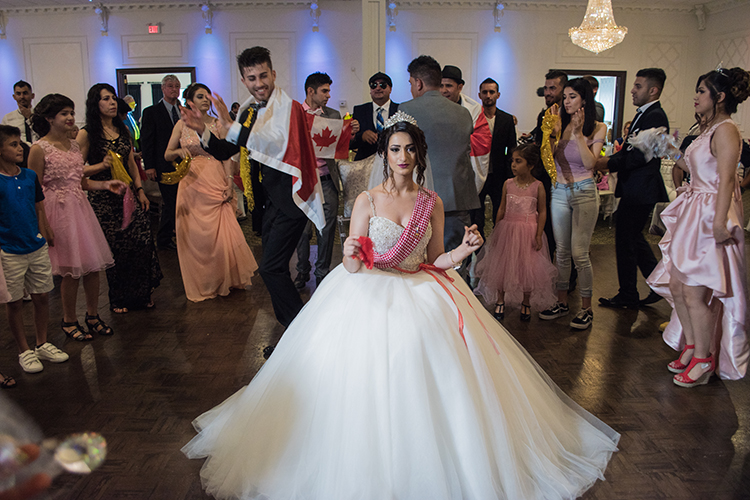 Last Friday the Yazidi community in Richmond Hill celebrated their first wedding in over five years. A lot has gone on for the Yazidis between weddings - Mt. Sinjar, genocide, and the capture of their women and girls by ISIS - so it would be no surprise if they weren’t up to celebrating. Yet despite the worse nightmare that could happen to good and decent people, Friday was a celebration of life and freedom for the Yazidi community.

The Yazidis came from London, from New York, and from Montreal. And they came to dance. The men, the women, and the children danced non-stop in Yazidi fashion to the deafening Yazidi band playing traditional songs. Holding hands, the men, woman, and children circled the floor, dancing with intricate footwork and swaying shoulders. Survivors of ISIS, children with scars, new arrivals, women who lost their husbands and their sons, and those who were rescued from the slave markets.

It was a magical evening, as though the joy of a wedding in a new land canceled out their tragedy. This was not a time to grieve, but a time to laugh, and celebrate. Even little Abraham, born in Canada just 9 months ago, knew how to dance. Lifted high on the dancefloor he smiled and moved his arms up and down to the beat as he was handed from Yazidi to Yazidi. Safe in the hands of his Yazidi community, all of which act as extended family, he is confident and secure and loved.

While the wedding was not extravagant, there was an aura of grace and nobility that is curiously absent from so many mainstream Canadian affairs. The abundance of love, community, and the pure joy of being in the moment made everything seem perfect. This was the dignified wedding of proud mountain people who have suffered so terribly under ISIS.

Canada needs communities like the Yazidis. For all the suffering these people have endured, they come to Canada with the expectation that they will get on with lives - new lives, speaking English, getting an education, getting jobs, getting married, and becoming Canadians. These are the kind of people that we want to come to Canada, people who understand what freedom means, what respect for all people means, what equality means, and what community really means. They are industrious, and are working hard to support themselves – and the new Yazidi arrivals whose men are gone, and whose scars are deep.

With our ever-growing army of volunteers, Project Abraham is working along with the Yazidis community, One Fee World International, and the Yezidis Human Rights Organization – International to support the Yazidis. We are also lobbying the Government of Canada, reminding them of the tragedy of the Yazidis genocide, and asking them to do more for a people who have suffered so much. We need their support, and their resources. And we need them to expedite the family reunification process. Genocide demands it.

We are doing whatever we can to help, but we need to do more – much more.