Speak the Truth--Recognize the Genocide of the Armenians 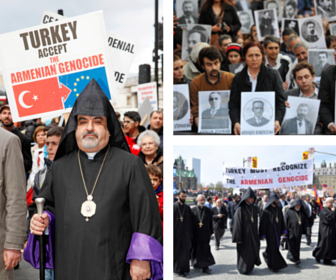 April 2015 marks the 100th anniversary of the Armenian Genocide, perpetrated by the “Young Turks” with the full support of the Ottoman Turkish government bureaucracy, before their defeat in 1917, and to this date denied by all subsequent Turkish governments.

More than one and a half million Armenian men, women and children were raped, tortured, put on forced desert death marches and executed.

This systematic genocide of the Armenian people has been considered a template for all modern genocides. Let us remember that in 1939, when asked if his war against the Jews would be opposed by other governments, Adolph Hitler retorted, “Who still talks nowadays of the extermination of the Armenians?”

“…our grandmother’s father provided cavalry horses to the Ottoman Army and had for years by 1915... That spring, instead of buying the horses legally as they always had in the past, they simply shot her father to death, confiscated the herd, and then—for good measure—confiscated the family home.”

Recognition of the Armenian Genocide is the obligation of all civilized peoples. Make your voice heard by signing this petition, and make your donation count. Together we are stronger - we cannot do this without you!