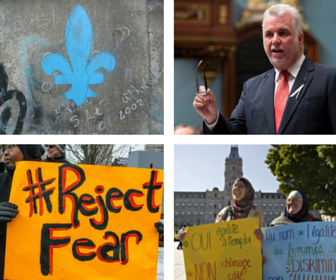 We, citizens and friends of Canada and Quebec, would like to make known to you our fear and anxiety over what may happen if you adopt Bill 59 as law in the province of Quebec. Your legislature has been considering Bill 59, which if it becomes law, may drastically reduce both freedom of speech and religious freedom in the province of Quebec. In this week's National Post we read the following:

Bill 59 assigns new powers to the Quebec Human Rights Commission (QHRC) to combat hate speech, as well as a variety of other provisions meant to protect against extremism by censoring speech that promotes “fear of the other.” Ominously, the bill would allow the QHRC to pursue websites that in its estimation describe and denounce Islamism. Article 6 would “give the QHRC the power to initiate legal proceedings before the Quebec Human Rights Tribunal without having to wait for complaints from the public.” Frémont explained that he planned to use the requested powers to sue those critical of certain ideas, “people who would write against … the Islamic religion … on a website or on a Facebook page.”

This would mean that any Muslim residing in Quebec who, exercising their religious freedom to change their faith could be prosecuted for writing in public why they left the faith of Islam voluntarily and their criticisms of the faith that they were raised in. This would be a gross violation of their human rights. Secondly any member of a non-Muslim faith who non-violently argues for the truth of their revelation, be it Jewish, Christian, Hindu, New Age, Buddhist or whatever could be liable to prosecution if they declared it superior to Islam. Finally, any atheist secularist who believes that Islam or any other religion is a fantasy of the human imagination could also be prosecuted.