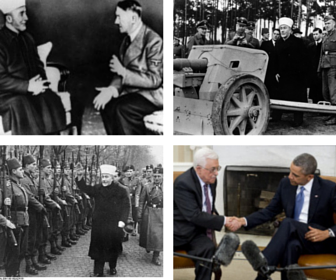 In his autobiography Haj Amin wrote:

"Our fundamental condition for cooperating with Germany was a free hand to eradicate every last Jew from Palestine and the Arab World. I asked Hitler for an explicit undertaking to allow us to solve the Jewish people in a manner befitting our national and racial aspirations and according to the scientific methods innovated by Germany in the handling of its Jews. The answer I got was, 'the Jews are yours.'"

Ami Isseroff and Peter Fitzgerald Morris, The Iraq Coup Attempt of 1941, the Mufti and the Farhoud

There can be no solution to the Israeli Arab conflict until Arabs in Arab and Islamic countries, recognize and atone for the active participation of Palestinian leader Haj Amin al Husseini in the Nazi war effort. There can be no peace without truth.