STOP THE SLAUGHTER: They're taking our homes, our women and our lives 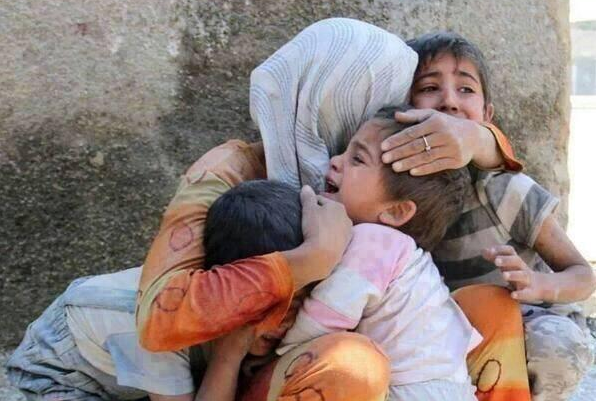 While we sleep peacefully in our beds, the Yazidi people of Iraq and Syria are being driven from their homes, the men and boys crucified and killed, while the women and children are raped and enslaved. Those who manage to escape have become refugees within Iraq, Syria, Jordan and abroad.

According to the Yezidi Human Rights Organization, more than 7,000 women and children have been captured by ISIS so far, and the slaughter and enslavement is continuing.

Nineteen year old 'Zaytoun' was captured and then raped 20 times a day by young ISIS fighters until she was sold off and married to an 80 year old Muslim man. She managed to escape but she is severely traumatized. Many Yezidi have chosen suicide over enslavement or conversion to Islam at gunpoint. Entire families have been murdered

This BBC documentary explains how women are being captured and abused by Islamic terrorists:

Surely we have learned from past genocides such as those against the Jews, the Armenians and the Rwandese, in both Europe Asia and Africa. We must not now turn a blind eye to the suffering of the Yazidi. We welcome and support the military and humanitarian intervention of Canada, the US and its allies in the war that now engulfs Iraq and Syria. But, we must do more!

There is no excuse for standing by. Let us tell our governments that they must do more, for they were elected to represent us. Together, let us demand that they provide more aid and protection for these innocent people. The Yazidi are the most ancient national group in Iraq and Syria and deserve our fullest support. They are among the indigenous peoples of Iraq and long predate the Muslim conquest.

Fill in the form and click to add your signature to this petition and your voice to Mozuud as a member. Together we are stronger!

When our petition passes the 1000 mark we will present it to federal representatives for Canada and the United States.