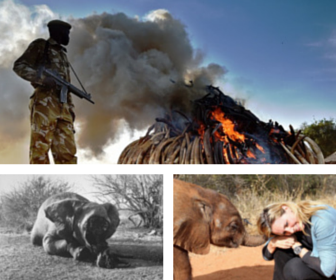 Are you willing to stand by and watch the slaughter of elephants for their ivory tusks to fund terrorism? You can make a difference. Will you choose to do so?

The latest players in this deadly game of killing elephants to fund terrorism are the Somali Jihadis called Al Shabaab, which is Arabic slang for "The Youth." They are lawless allies of Al Qaeeda.

Al Shabaab is the strongest militia in Somalia today. They have been joined by Americans and Canadians of Somali descent, who want to help them wage their holy war. They spread terror by any means, including attacking shopping centres in downtown Nairobi, as well as killing other Somalis who do not accept their Jihad.

Much of their financing comes from their role as middle men smuggling ivory tusks, out of Africa and into Asia. So when someone buys an ivory crucifix in the Philippines, or a Buddhist sculpture in Hanoi or Peking, they are probably funding Al Shabaab's terror campaign. We must not let this continue.

Al Shabab, the Somalia-based militant regime, is dependent on the ivory trade to finance its terrorist insurgency in eastern Africa. 40 percent of its revenue comes from the illegal poaching practice. As a result, its ivory revenue is a source of vulnerability. - Jeremiah Foxwell

We cannot succeed without your help! A few short years ago, the world's nations agreed to a temporary ban on the exportation of ivory from Africa. When it went into effect, elephant populations bounced back across the continent. Now, the ban is no longer in effect. Elephants are widely poached and Al Shabaab now uses the ivory trade to fund its Jihadi terror. Help us stop this inhuman slaughter of elephants. Help de-fund Al Shabab!